This is where perusing the local weekly entertainment rag is worth while. I had heard about this lady Little Miss Higgins and heard a few of her songs on CBC Radio2 and thought this is some pretty good guitar playing, I should check it out some time. Then I see in Now Magazine that she is playing a gig at the Dakota Tavern in the west end that very night. Starting early at 7pm! Okay then! lets go.

What a show! Little Miss Higgin’s along with Foy Taylor accompanying on guitar and harmonies put on a very entertaining set of country and blue’s songs.  Stories about small towns, touring, some undergarment references and life in general filled in with some good ol’ gutsy guitar playing  got people drinking it up, myself included. 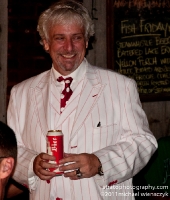 The Dakota was also privileged to be a stop on the Jamz Bee hosted Jazz Safari tour that evening. Jamz Bee, a social guru, hosts the JazzFM91.1 sponsored group trips to various clubs around town checking out live music.

This gig took place Sept 25th, 2010. Shortly afterwards , Little Miss Higgin’s was part of the Women’s Blues Review at Massey Hall. I’m glad I had the chance to take pictures at the much smaller and intimite Dakota Tavern before the Massey Hall show.

Miss Higgin’s is currently on tour in England and Ireland, returning to Canada in May for a stop in Ottawa then out to the west coast for a few gigs.

my gallery from this show: Little Miss Higgin’s Live @ The Dakota Tavern

Photog notes: there was not a lot of light in the Dakota so for most of the shoot I had the ISO cranked up to 3200. I was also using a variable aperture zoom which was not too effective in this situation. It was the only lens I had at the time, this fact helped me understand what it was I was going to require to get better low-light shots in the future.